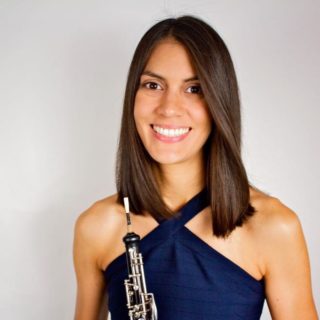 Xiomara participated in many prestigious music festivals, including “Tercer Festival de Dobles Cañas” in Panama, The Youth Orchestra of the Americas, Domaine Forget, St. Barth’s Music Festival, The Sunflower Music Festival, ChamberFest Cleveland and The New Hampshire Music Festival. She was selected to participate in the 2011 YouTube Symphony Orchestra during its residency at the Sydney Opera House in Sydney, Australia, which included a live Internet simulcast to over 30 million viewers worldwide.

In 2014,  Xiomara won The Jerome and Elaine Nerenberg Foundation Scholarship award at the Musicians Club of Women Competition in Chicago. She is also the first prizewinner of the Tuesday Musical State Scholarship Competition in Akron, Ohio, and the first Chamber Music Competition at the “Conservatorio de Música” as a member of her woodwind quintet.

Xiomara taught as an adjunct professor at the DePaul University School of Music and is currently teaching at Washington University in St. Louis. She holds a BM in Oboe Performance and an Artist Diploma from Oberlin Conservatory, where she graduated with highest honors under the tutelage of Alex Klein and Robert Walters.