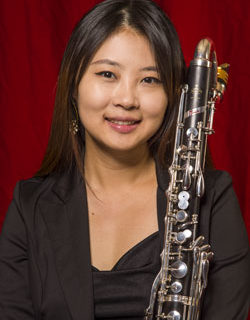 Tzuying Huang was appointed Bass Clarinet of the St. Louis Symphony Orchestra in 2015. Prior to this, she was Bass Clarinet of the Kansas City Symphony. Originally from Taipei, Taiwan, she began her music training on piano when she was five and began playing the clarinet at the age nine. Tzuying earned a Bachelor of Music degree from the Taipei University of Education and moved to the United States in 2007 to study at the Jacobs School of Music at Indiana University. There she studied with James Campbell and graduated with a Master’s degree and Diploma in Clarinet Performance. Tzuying received a full scholarship to continue her graduate studies at the University of Texas-Austin, pursuing a Doctoral in Music and Art and served as a teaching assistant for Nathan Williams while performing as a member of the Graduate Wood Wind Quintet.  She has been a member of the Banff Music Centre Orchestra, Young Artist Program of the National Arts Centre in Ottawa, Tanglewood Music Center, and the Aspen Music Festival and School where she studied with Burt Hara and Joaquin Valdepeñas for three summers as the Bass Clarinet Fellow.