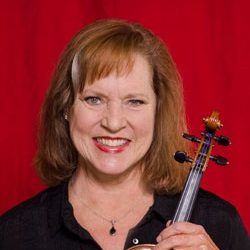 Rebecca (Becky) Boyer Hall came to the St. Louis Symphony Orchestra Second Violin section in 1993, but she has a long history in St. Louis. Becky was born and grew up in Kirkwood, Missouri, and received her first musical influences within her family and community. Her great-grandfather, George Sullivan, emigrated from Ireland and brought with him a rich tradition of folk music, which was carried on through Becky’s mother, Janet, and her uncle, Robert Beers. The Boyer family performed as a musical group throughout the 1960s and ’70s bringing traditional American folk music out of the home and onto the stage. Among some of the instruments Becky plays, besides violin and fiddle, are guitar, banjo, mandolin, pennywhistle, hammered dulcimer, and psaltery, along with a love for singing.

Becky began her classical music education by going to hear her mother play concerts with the Kirkwood Symphony. She later continued with lessons through the public school system. She received her Bachelor of Music degree from the St. Louis Conservatory (now the Webster University Community Music School) and later pursued graduate studies there, subsequent to the gift of a full scholarship. Becky was also a member of the St. Louis Symphony Youth Orchestra. She studied with Fredryck Sadowski and Jaime Laredo. She also had the opportunity to participate in the master classes with such distinguished violinists as Isaac Stern, Henryk Szering, Michael Tree, and Alexander Schneider to whose famed Christmas Seminar at Carnegie Hall she was invited.

While a student, Becky was the Associate Concertmaster and appeared as soloist with the Colorado Philharmonic. Her string quartet was in the final round of the prestigious Coleman Competition.

Becky and her husband, Jerome, make their home in High Ridge, Missouri.