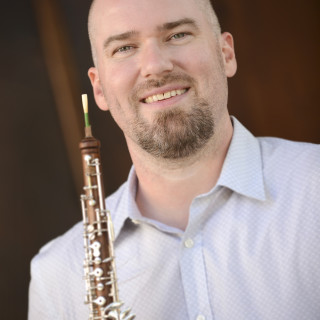 Philip Ross joined the St. Louis Symphony as 2nd oboist in 2005. He holds degrees from the Eastman School of Music and the Chicago College of Performing Arts where he studied with Richard Killmer and Alex Klein respectively.  Philip served as Acting Co-Principal Oboe with the St. Louis Symphony for two seasons, 2012-13 and 2013-14, and has appeared as soloist on several occasions, most recently in January of 2015 with Nicholas McGegan conducting.

He has made appearances as guest principal oboe of the San Francisco Symphony, toured with the Chicago Symphony, and recorded with the Cincinnati Symphony Orchestra. He also takes part in the St. Barts Music Festival.

Philip is a native of Jonesboro Arkansas where his father, Dan Ross, has been the Professor of Oboe at Arkansas State University in Jonesboro since 1968. Philip enjoys performing with his wife and fellow oboist, Laura. For relaxation Philip enjoys fly-fishing and golfing. Philip and Laura welcomed their first child in April, 2013.