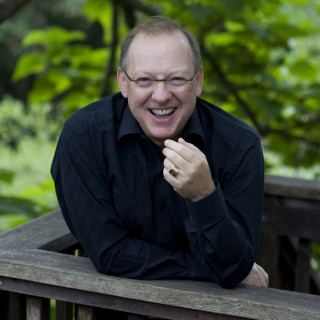 Nicholas McGegan is loved by audiences and orchestras for performances that match authority with enthusiasm, and scholarly responsibility with evangelical exuberance. The London Independent calls him “one of the finest baroque conductors of his generation” and The New Yorker lauds him as “an expert in 18th-century style.”

He has been Music Director of Philharmonia Baroque Orchestra for 25 years, and completes a two-decade tenure as Artistic Director of the International Handel-Festival Gottingen in 2011.

He has been a pioneer in the process of exporting historically informed practice beyond the small world of period instruments to the wider one of conventional symphonic forces, guest-conducting orchestras like the Chicago Symphony, Cleveland Orchestra, Philadelphia Orchestra, St. Louis Symphony, Toronto Symphony, Sydney Symphony, the New York, Los Angeles, and Hong Kong Philharmonics, the Northern Sinfonia and the Scottish Chamber Orchestra.

Born in England, he was educated at Cambridge and Oxford. He was made an Officer of the British Empire (OBE) in the Queen’s Birthday Honours for 2010 “for services to music overseas.” His awards also include the Halle Handel Prize, and an honorary professorship at Göttingen University.

Visit Nic McGegan on the web at www.nicholasmcgegan.com