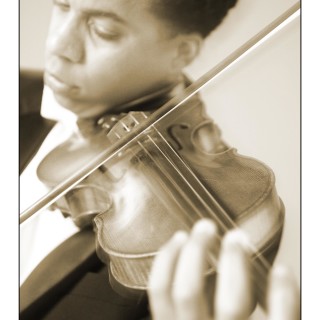 Violinist Kyle Andre Lombard is a native of Kansas City, Missouri. He graduated with honors from Indiana University, earning the prestigious Performer’s Certificate, and received his Masters Degree from Yale University. As a chamber musician, Kyle has performed throughout Europe, the Middle East and the U.S. most recently performing on chamber music programs at Carnegie Hall and at the Ravinia Festival’s “Rising Stars” series. As participant with Jacksonville Florida’s Ritz Chamber Players, an organization dedicated to performances and educational activities that features preeminent African-American musicians and composers, Kyle was featured in the University of Washington’s esteemed “World Series of Chamber Music”. He performs regularly in a residency at Morehouse College, which includes both concerts and master classes. As a member of the Goffriller Piano Trio, Kyle’s performances were broadcast on Israeli Public Radio during Isaac Stern’s 3rd International Chamber Music Encounters in Jerusalem. He also performed, as a member of the Gateways Chamber Music Ensemble, in a weeklong residency with the Chicago Symphony Orchestra.

As a soloist, Kyle made his debut with the Kansas City Symphony at age sixteen, the first Kansas City area musician ever invited to perform with that orchestra. He has also concertized with the Savannah Symphony, the Sphinx Symphony, as well as recitals at the MOJA Festival in Charleston, S.C. and on the recital series at Southern Illinois University. Kyle completed a two-year fellowship with the Saint Louis Symphony in 2001 and has performed regularly with the orchestra since then as well as participating in the orchestra’s Community Partnership Program. He plays on a Gennaro Vinaccia violin dating from 1775.

From Salzburg; Mozart and Friends.

A musical game show with prizes.