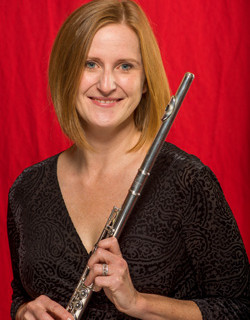 Jennifer Nitchman has been described by critics as giving performances that are “deeply felt” with “a tone like spun gold”(St Louis Post-Dispatch). She was appointed to the position of Second Flute with the St Louis Symphony in 2003 by then St. Louis Symphony Artistic Advisor, Itzhak Perlman. An active teacher, Jennifer is a member of the faculty of Saint Louis University and maintains a private teaching studio in her home.

Previously, she has been on the faculty at the Brevard Music Center and Southern Illinois University at Edwardsville, and is a frequent guest for master classes and recitals at flute festivals and universities. Ms. Nitchman has also performed with the Boston Symphony Orchestra, Baltimore Symphony Orchestra, Fort Wayne Philharmonic, the Britt Festival and the Brevard Music Festival. She previously held the position of Assistant Principal Flute with the United States Army Field Band in Washington, DC.

Jennifer holds a Master of Music from the University of Wisconsin-Madison, a Bachelor of Music from Ithaca College and has also completed coursework towards a Doctor of Music at Indiana University-Bloomington. Interested in the revitalization of St Louis City, she and her husband have restored two homes in different neighborhoods. Jennifer also serves on the board of Tenth Life Cat Rescue, which prioritizes saving cats with special needs. She lives in St Louis with her husband and three cats.