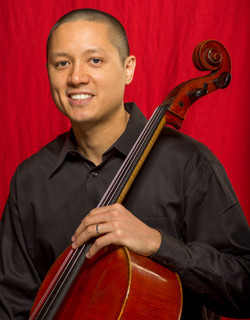 Cellist James Czyzewski has been a member of the Saint Louis Symphony Orchestra since 2004.  Prior to his appointment with the Symphony, he served as Principal Cello of the Civic Orchestra of Chicago and as Assistant Principal of the Fairbanks Symphony.  James made his solo debut with the SLSO in the fall of 2014 performing Tchaikovsky’s Pezzo Capriccioso.  Other solo performances include those with the Fairbanks Symphony and at the 2003 National Cello Congress.

James is from from Fairbanks, Alaska, where his primary cello teachers were Peggy Swartz and Bruno DiCecco.  He received his Bachelor’s Degree graduating with honors from Northwestern University in the spring of 2003, studying with Hans Jorgan-Jensen. While at Northwestern, James was the recipient of the Samuel and Elinor Thaviu Scholarship.  He also received full scholarships to attend the prestigious Meadowmount School of Music.

James lives with his wife, violinist Joo Kim, and their daughter Olivia.  He plays on an Italian cello made by Marino Capicchioni in 1971.

Music by and for the Crowned Heads.