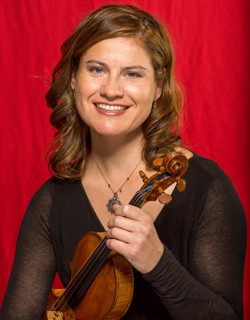 Angie Smart has been a First Violinist with the St. Louis Symphony since 1998. Originally from England, she began violin lessons at the age of six and won a scholarship to study music at the age of 13. She continued her studies in the U.S. in 1990 where she attended the University of Miami, Lamar University in Texas, and completed her master’s degree at Rice University in Houston. Angie has performed extensively in Europe and the U.S. with representation by Encore Concerts, and has appeared as soloist with the St. Louis Symphony, Alhambra Chamber Orchestra, Gorton Philharmonic, and Lamar Chamber Orchestra. Her television appearances have included master classes with Yehudi Menuhin and as the subject of a documentary profiling young musicians. Angie competed in the 10th International Tchaikovsky Competition and the Yehudi Menuhin Competition, and has been a prizewinner in other competitions, including the British Violin Recital Prize, Elizabeth Harper Vaughn Concerto Competition, and the William C. Byrd Young Artists Competition.

Music by and for the Crowned Heads.