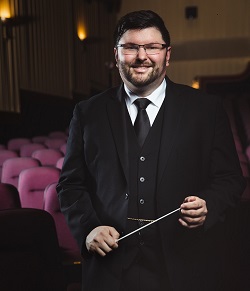 Conductor Andrew Greene is one of the leading authorities on orchestral ragtime and silent film accompaniment in the United States. Andrew founded Peacherine while a freshman at the University of Maryland in 2010, hoping to draw attention to this neglected but historically important music.
He is the curator of several prominent orchestral collections, notably the John. S. Maddox, Eastman Theater (Rochester NY), Arthur C. Ziegler, Arthur O. Newberry, and Fred G. Bauer Collections, along with his own personal collection of American popular music. The collection totals over 15,000 selections, and focuses heavily on the music of 1882 to 1935.
Andrew has appeared at the Kennedy Center, The Smithsonian Institution, The Library of Congress, and the American Film Institute, among others. His lecturing, guest conducting, and concert activities have taken him across the United States, with notable recent performances with The South Dakota Symphony, The Fremont Symphony, Scott Joplin International Ragtime Festival, West Coast Ragtime Festival, and the Central Pennsylvania Ragtime Festival. Andrew resides in the greater Annapolis, MD area. He is a voting member of the National Academy of Recording Arts and Sciences (www.grammy.org). His personal website is www.greeneragtime.com.
← Yin Xiong
Joey Antico →