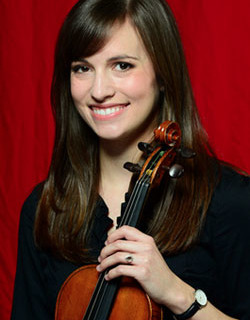 Andrea joined the violin section of the St. Louis Symphony in September 2015. Prior to her appointment with the Symphony, Andrea participated in the 2013 New York String Orchestra Seminar under the direction of Jaime Laredo. She also performed as a soloist with the Dearborn, Birmingham-Bloomfield, Toledo, and Ann Arbor symphony orchestras and was a member of the first YouTube Symphony Orchestra in 2009, with concerts in Carnegie Hall under the baton of Michael Tilson Thomas.

Andrea has participated in numerous festivals including the Pacific Music Festival in Japan, where she served as concertmaster under Fabio Luisi, Music Academy of the West, Spoleto Festival, Astona International Academy in Switzerland and theHeifetz International Music Institute. Andrea Jarrett loves spending her spare time cooking and baking. Her newest hobby is knitting, and she can often be spotted at “Knitorious,” St. Louis’s specialty yarn shop.